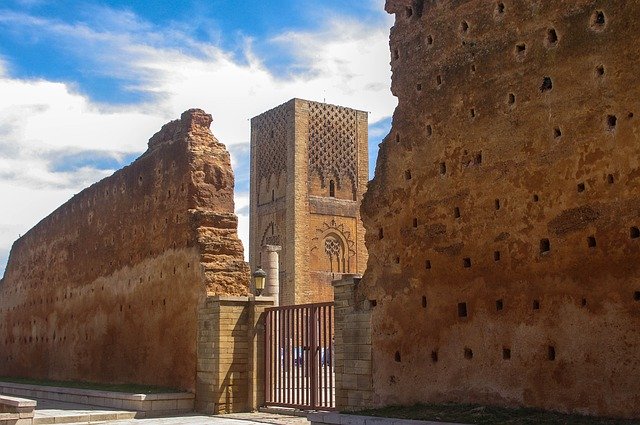 The capital of Morocco lies along the shores of the Bouregreg River in the Atlantic Ocean. In general, Rabat is not as famous as the other Imperial cities in Morocco. Many people think that Casablanca, Fez or Marrakech is the capital of Morocco, but guess what Rabat is the capital since the 12th century. Moreover, Rabat was found by Abd al-Mu’min who was an Almohad ruler. He constructed it as a military town/base to face his enemies.

Things to see and do.

Clearly, when visiting Rabat, you should not miss visiting the Hassan Tower. After moving the capital from Fez to Rabat in the 12th century. The Almohad ruler, Yaqub al-Mansour made an order to construct the largest mosque in the world. But, unfortunately, he passed away before turning his dream to become true, as a result, people abandoned his idea and the work was left incomplete. However, it is possible to enter this place, which makes it a good spot for pictures, and definitely worth your visit.

The Chellah or Shalla is a medieval Muslim cemetery that is a little bit far from Rabat center, the Phoenicians made of it a trading emporium before the Romans turned to be their colony. After that, when Almohads came, they added their own touch to this beautiful place. For instance, they built a new mosque. Moreover, this place had experienced an earthquake which caused big damage to its buildings. However, many people are still gathering together every year to attend and celebrate the Chellah Jazz Festival.

The old Medina of Rabat:

The Medina of Rabat is partly modern. But if you have a deep look at the streets of this city, you will see many old and beautiful spots that tell the unique story and history of rabat. Like other Moroccan cities, Rabat has many activities to offer such as surfing and shopping.

For a unique experience around Morocco via Rabat, join our tours here.